You are here: Home › Gadgets › Textiles, Fairs, and the Duration of the Book

Visit Website I attended the Fryeburg Fair this past weekend. It is the largest agricultural fair in New England and also the last of the season. The craft barn featured this beautiful book quilt: 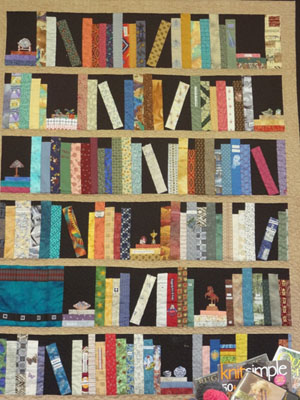 Fairs are fascinating spaces of heterochrony — very old-fashioned forms of cultural gathering, like animal shows and pig scrambles, rub up against new forms of calorically-amped eating rituals and vertigo-inducing rides. In this sense, the book quilt is a kind of perfect instance of Burke’s theory of a scene-act ratio. Just as the quilt commemorated the book’s felt sense of doom, it nicely foregrounded the fair’s own sense of obsolescence, or at least a duration that exceeds cultural relevance. And just as the quilt harkened back to the book’s origin as a textile and sewn object (bindings used to be sewn, not glued, though some still are), it drew attention to the origins of the fair as a space to promote artisanal handicraft practices as a means of fostering human sociability. We come together around our tools.

There is a great deal of anthropological wisdom encoded in that quilt.

Book Was There:
Reading in Electronic Times (Chicago)

"A fascinating glance at the page as it was, as it is, and as it might yet be."
- http://redknightsny42.org/mbed/CMK_jl1LVUg Publisher's Weekly